Behind the scenes of my YouTube and Facebook Live stream set up. This is a walkthrough of my live stream equipment set up and how I currently arrange it to get high-quality live streams.

Hello, and welcome to the live stream, whether you are joining live with us now, or if you’re catching us on the re-play. I’m really excited today. I’m doing something a little bit different. I am going to be walking you through my live stream set up on a live stream.

It’s a little bit of live stream inception. And this is all about, just about look behind the scenes in terms of what I do in terms of my setup, how I’ve kind of all got it laid out so you guys can see, you know, what’s happening when I do what I do.

For those of you who don’t know me, my name is Sara Nguyen, and I help you build a business using video on social media with ease. Now, whether you are joining live with us now, or if you’re catching the replay, please feel free to drop a question in the chat or in the comments.

What microphone do I use? How do I kind of have my setup all arranged? And I thought, all right, I’m going to show them how it kind of all happens.

A look behind the scenes and I’m doing, I’m going to do it live. I thought that this could go incredibly wrong, but I know that, you know, there’s only one way, there’s, there’s no time like the present, so let’s just do it.

I thought, you know, first things first I’ll show you a look into the actual space. I also get questions on whether these backdrop is a green screen, and it’s not. I actually live stream from a spare bedroom in our house, and it’s also the same space that I work on all my YouTube videos, as well as non YouTube work-related stuff.

Other projects that I’m a part of. Let me have a, let me zoom back so you can kind of see a little look at the actual room. This is pretty much the room.

As you can see, this is a shelf, it’s a shelf with some piping that I purchased and the wall is painted. And at the bottom there, you can see like that’s just an Ikea desk. And as you can also see over there to the side, I’ve got my sewing machine.

And the microphone is mounted to a microphone arm, which is mounted to the desk. And the reason that I have it like this is because during a live stream, it works great in terms of being in front of me and I can use it. When I’m not actually streaming, what I can do is I can swing it out of the way, and then it’s no longer actually there.

I can, you know, I have that space free. That’s the first thing that I have. I’ve got my little Shure sm7b microphone, and it is an XLR microphone. That requires it to be plugged into an audio interface.

That’s how that comes together. I was like, Oh, this is going not too badly so far. Now, in terms of the actual, I’m going to move the microphone back out of the way, now let’s draw this back a little bit more so we can talk a little bit more about this entire setup.

That’s how that kind of comes into play. Now, in order to live stream in 4k, I’ve got here, this is, it’s a little bit blurry, but this is my AVerMedia capture card. And it is a 4k capture card.

It’s on the higher end, but it’s incredibly reliable. I love it because it has never let me down in terms of quality. It turns on every single time, unlike another capture card that I’ve had to deal with.

And it is like one of the best capture cards in the world. I absolutely love that. Now, the camera that I use, let’s kind of bring you a little bit closer here, like I’m manually moving this webcam, it’s actually hilarious, the camera that you see here, so this is the Canon 90d.

It’s been my trusty live streaming camera for a year. I think it’s literally coming up to a year that we purchased it because it came out about I think it was, no, it came out about October or November, 2019. And then in December, that year, last year we were going overseas.

We saw it on sale during the boxing day sales. And then we’re also going overseas so we’ve got duty free. That’s why we grabbed it ’cause it was kind of the best price that we’re ever going to get it.

That’s the camera that I use and behind the camera, as you can see, is my ring light. Now I’m not in love with where it is at the moment. It’s just on a tripod sitting behind things. My aim is to eventually move it so that it can be part of this mount that you see.

I try to keep it as minimal and off the desk as possible. And the other thing that I found and the reason that I have this wonderful desk mount-y thing, and the links are in the description, is I found that prior to having this desk mount, I was using actual tripods. And the tripod would take up like an extra like metre on each side. And it was just filling up the room with just a tripod.

And I was feeling so claustrophobic. Like the whole thing was just kind of collapsing on top of me. This is kind of like a look into how it all comes together for me. We’ve got a solid monitor mount that kind of acts as a monitor mount, as well as acting as my DSLR mount.

I’ve tried different options with the DSLR. Elgato also have a, you know, a mount as well. And I found that with that mount, it was too high. When I shoved it onto the desk, it actually came like up to here as the minimum point. And then, therefore, the camera was up there.

I found that this option was the best option. Then let’s break it down a little bit. Using my magic wand, what we have with this desk mount here, this is the arm that came with the desk mount.

I think like I have to give credit where credit is due. I was totally inspired by video that I saw by Taylor Pike and he had this phenomenal setup.

This is an adaptation of one that he did. His one is crazier and has more stuff like sticking out of everywhere and he has more cameras as well. But, you know, I’m kind of feeling pretty happy with how this is all kind of come together.

What’s some other things to note that I’ve got going? Okay. I think, like in terms of this setup, we’re going to go back to, I think in terms of this actual setup. I know I have to also say that, yeah, there’s a lot of stuff here.

I kind of have this added to it over time, over the last two years. I didn’t just buy everything in one go. It’s kind of just being this progressive thing prior to setting up the desk with the desk mount and the tripod, I had it on just external tripod so it’s kind of just been this thing that I’ve adapted over time and all this gear has kind of been added over time.

It’s not just a boom I woke up and then gear was actually there. Ooh, hopefully, you can hear me. I just realised that the microphone was way down. As I was saying, yeah, this was not, the setup was not like the first thing that I had.

I’ve kind of built it over time. Yeah. Sorry guys. Sorry. I just had the wrong– I was so excited. Like I’ve got this microphone and I’ve got this microphone, but anyway, so just keep in mind that in terms of desktop setups and in terms of live streaming setups I’ve built this over time. And, that’s something that you can do as well. And I think of, I think I’m almost there.

I’d like to mount the ring light so that it is also not on the floor and it’s mounted to the desktop mount as well, but that is pretty much a look into my live streaming setup. Now I’m going to go into the question to see what you guys are asking.

I had this great idea. I was like, I’m going to show them everything. I’m going to point to it with the wand, but then I kind of got a little bit overwhelmed by how much stuff I had and I had to show that the wand just kind of got in the way.

Anyway, so the mouse model, this is all Logitech mouse. I don’t know what model it is. Oh, David’s got it for me. The Logitech MX Master 2S. That’s the mouse model. Okay. I’m afraid to know how much I’ve spent over time for this setup, which is probably the caveat to me saying that this is kind of be built and gathered over a couple of years.

I didn’t just wake up and drop the insane amount of money on it. And it’s been a progressive journey as well. And I am of the school of thought that if you actually spend money to buy equipment, to get a camera, get an audio interface, you can justify it if you create content regularly. And I am. That’s my justification for it. Yes. Paul says, “This is a great setup based on DSLR Shooter’s set up.”

And I was like, I really need something that is more, I dunno, just it’s more compact and cleaner and tighter. And then I saw Caleb Pike’s video on his set up and I was like, I need to kind of work something out. And yeah, I borrowed bits and pieces of what he’s done.

And I think I’m kind of happy with how it’s all kind of come together. Paul says, “What cable management do you have?” I’ve got an answer to that, and that’s none. It is a mess.

I’m not going to show you underneath the actual table, because I don’t know how to deal with the cables other than hiding them and pretending that they’re not there and covering them because as you know, the more gear you get, the more cables you need and it’s, it’s a lot.

I don’t really have a solution to it. And also it’s not just the cables that, you know, come with your setup. It’s the other cables. With microphones, with gear, you end up with so many different cables everywhere, even those that are shoved in the cupboard over there.

I don’t know what to do with them either. I don’t have a solution for that as well. David says, “Best mouse in the world, except for maybe the latest model”. I think this is a pretty good mouse.

And then the wand was kind of just there, but not there. That essentially is a wrap-up of my live stream set up. What do you guys think about it? I’m sure I’ll get some judgy comments and I’m open to that, but remember it’s, I really think that live streaming, creating content, YouTube is a journey and we’re all evolving over time. 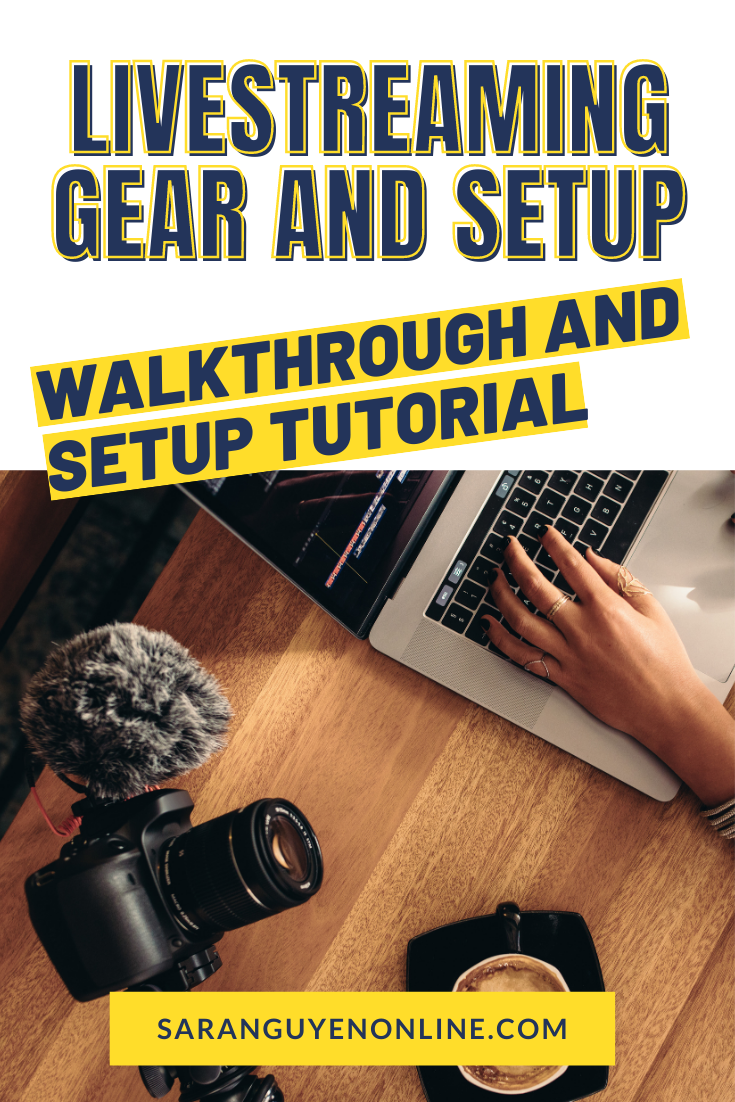 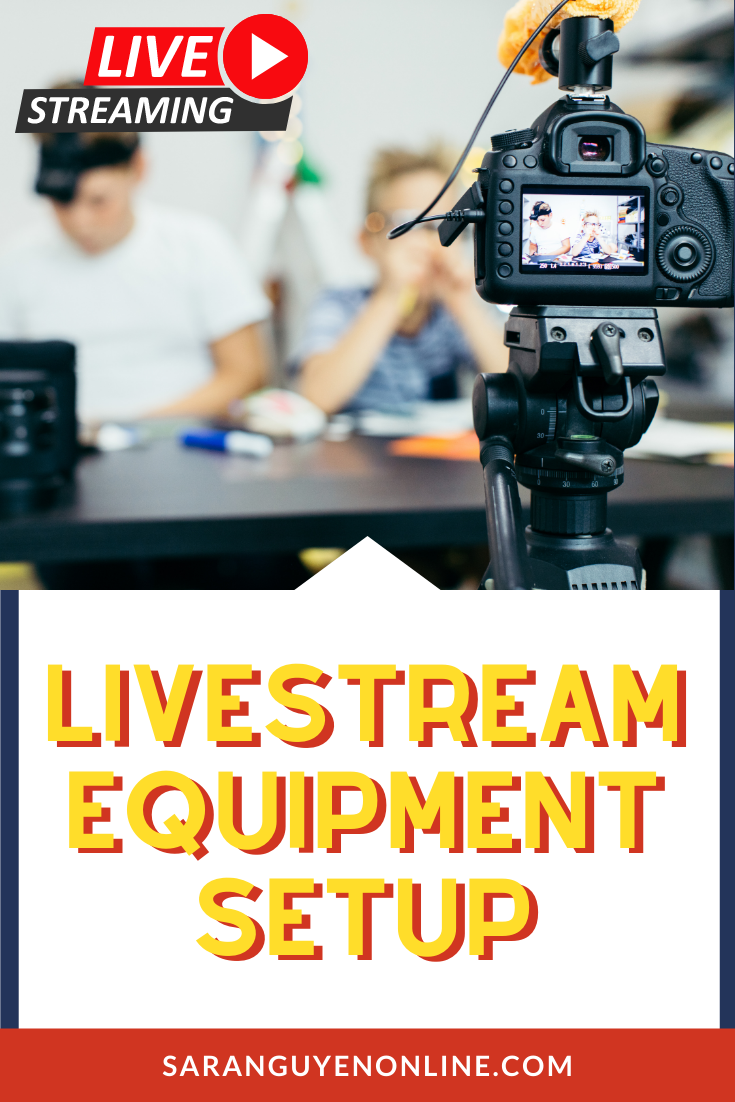 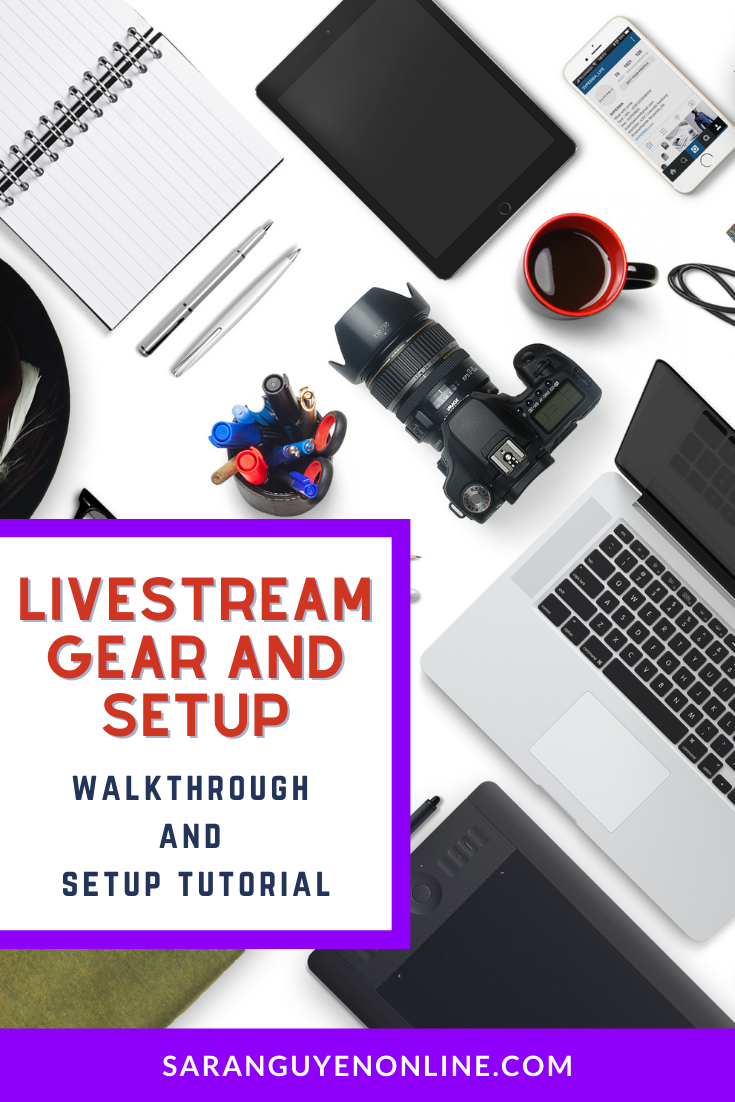 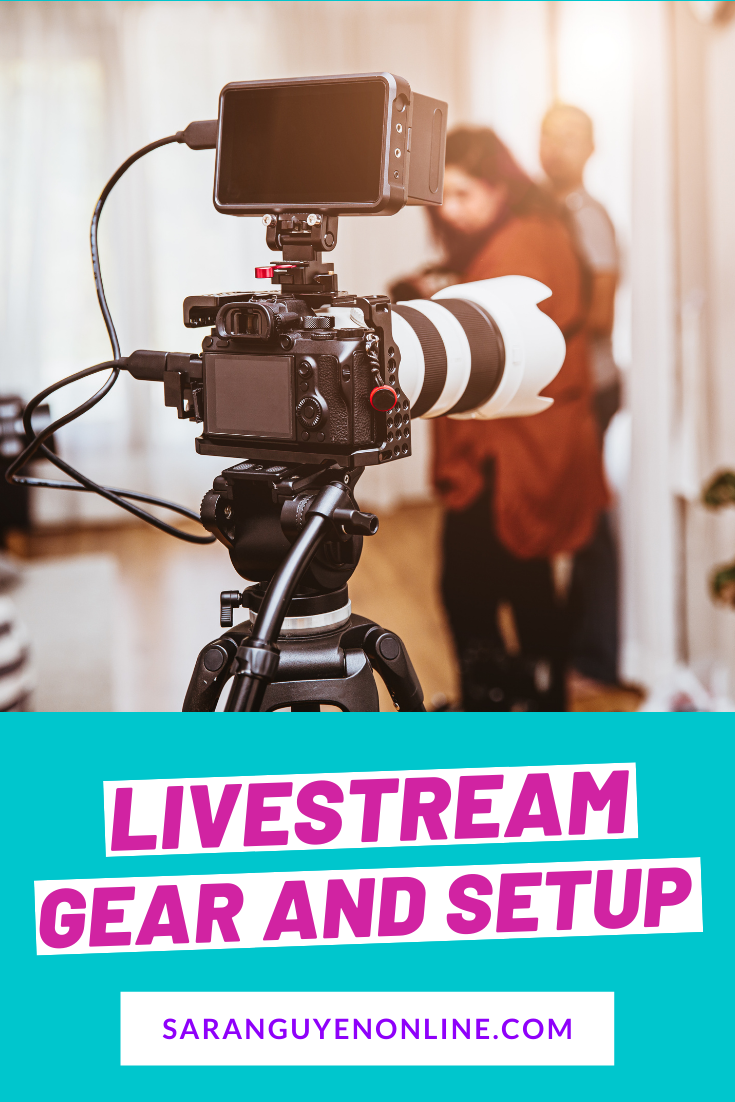 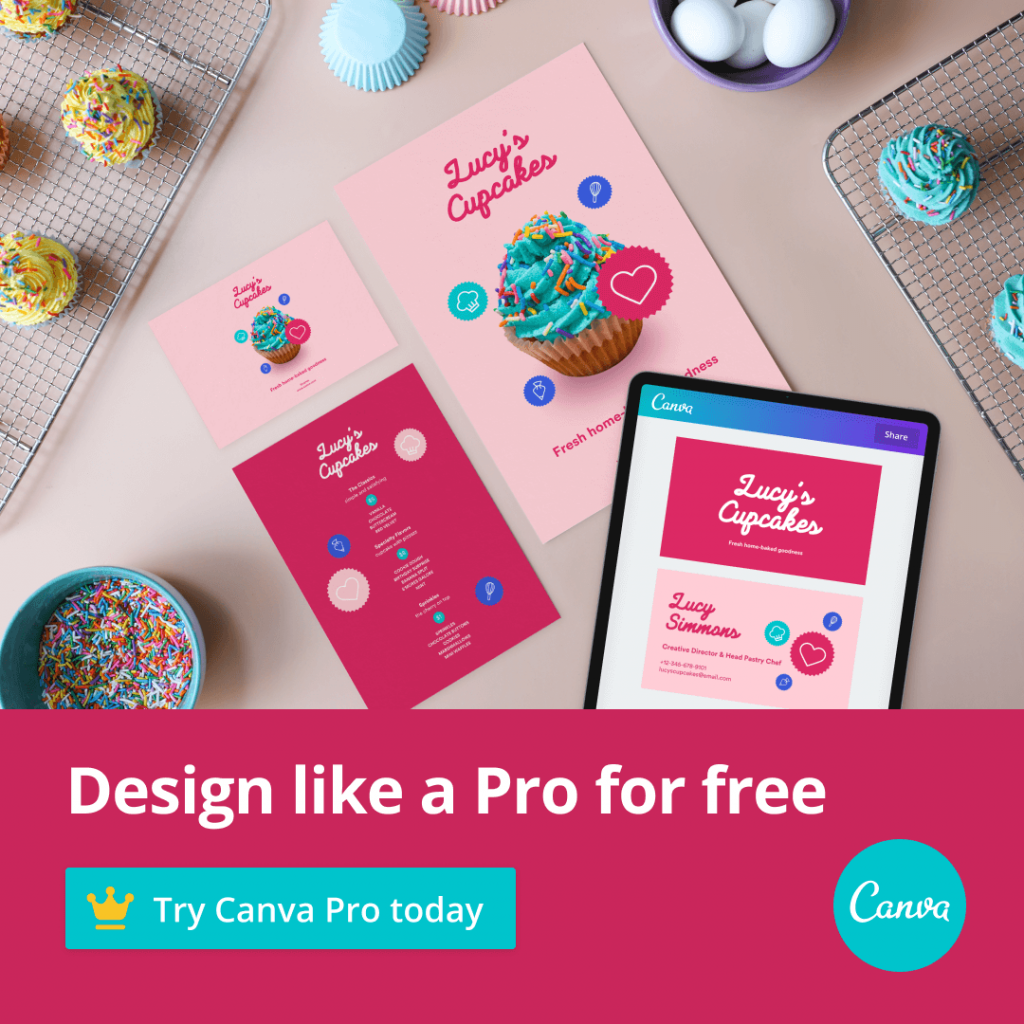